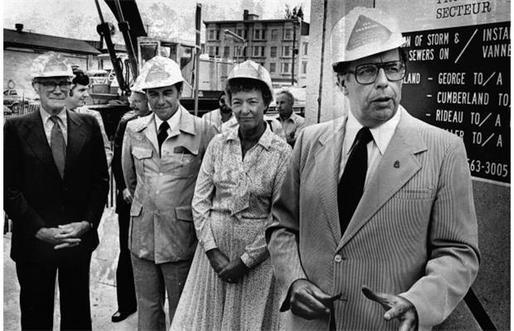 Mr. Baker was first elected to the Canadian House of Commons in 1972 as the Progressive-Conservative M.P. for Grenville-Carleton (later renamed Nepean-Carleton).  He was re-elected in the 1974, 1979 and 1980 elections, and he carried out his duties as an M.P. in such a way as to gain the admiration and respect of his peers.

In government, Mr. Baker introduced the first ever Freedom of Information Bill (Bill C-15).  Although Bill C-15 died on the order paper with the defeat of Prime Minister Joe Clark and his minority Conservative government, most of Walter Baker’s original Bill became part of the eventual Access to Information Act that was introduced by Pierre Trudeau’s Liberal government, and was given Royal Assent and passed by parliament into law in 1983.  Walter Baker also worked on the therapeutic hospital use of heroin, and parliamentary reform. 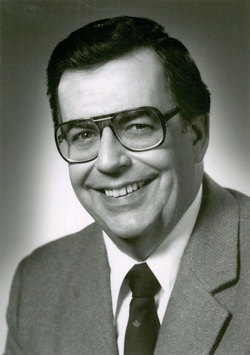 In spite of his busy schedule as a parliamentarian, Mr. Baker made time to attend a variety of local events, such as community fairs, ploughing matches, graduations, and community meetings.  He visited various neighbourhoods to make himself more accessible to his constituents, wrote letters congratulating children on special awards and others on special anniversaries.  He conducted groups of his constituents through the Parliament Buildings, discussed their problems, answered their letters and showed he cared.  Mr. Baker died in Ottawa on November 13th, 1983.  His wife Lois remained an honourary member of our Chapter, until her death in 2004.

The South Nepean Centre, located in Barrhaven, was renamed the Walter Baker Sports Centre to acknowledge the energy and commitment shown by Mr. Baker in serving his community.  The city of Kanata named one of their large city parks Walter Baker Park in his honour.   It was this same energy, commitment to community service and dedication to Canadian citizens that inspired our Chapter to choose Mr. Walter Baker as our IODE Chapters’ namesake.  We are honoured and proud to be connected to a gentleman whose actions and desire to help people are still fondly remembered today.

In June of 2013, IODE Walter Baker Chapter members were invited to attend the 30th Anniversary celebrations of the The Nepean Museum, where Walter Baker was inducted into their Wall of Honour.  Mr. Baker was recognized, along with 29 other exceptional individuals, for their notable accomplishments and contributions to the city of Nepean. The Wall of Honour, a permanent display at the museum, is a testament to individuals who have left a lasting legacy in Nepean.