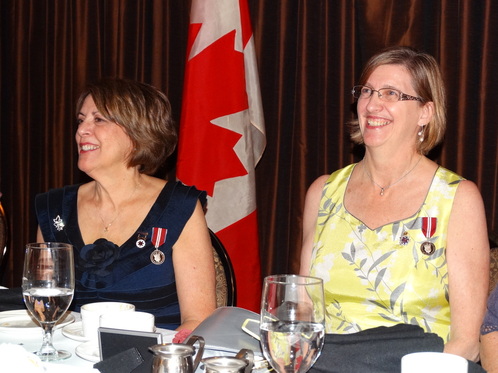 Out-going President, Ann Dyer seated with in-coming President, E. Anne Mason. (2013)
During her National Presidency, Ann traveled extensively, visiting chapters from St. John’s, Newfoundland to Dawson City, Yukon Territory, inspiring them with new ways to increase membership in their chapters and across our organization.  Throughout her travels, she promoted IODE with her quiet, gracious manner, and her sincere interest in IODE that re-ignited and re-energized a confidence in IODE for members and an interest to join IODE in the general public.

The members of IODE Walter Baker Chapter have long recognized the jewel that is Ann Dyer, and supported her whole-heartedly as she rose up through the ranks toward IODE’s ultimate office.  During her Presidency, Ann always firmly stated that although she is National President, she is first and foremost an IODE Walter Baker Primary Chapter member!

Ann, on behalf of all the members of IODE Walter Baker Chapter, congratulations on two exceptional years in IODE, and welcome back!  We've missed you!